LOCAL TIME, Kentucky (FNS) A study published in the Right Way, a conservative journal, purports to prove that 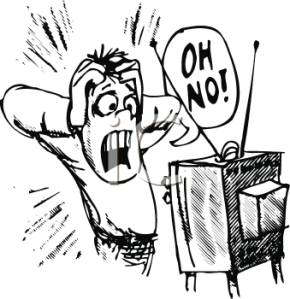 watching liberal tv shows such as those on MSNBC will often lead to heroin addiction. Sponsored by the ultra-conservative Heritage Foundation, the researchers quizzed over 6,000 heroin addicts in prisons and back alleys alike, and found that almost all of them admitted to watching Morning Joe, Hardball or Rachel Maddow at least once or twice before turning to heroin. “You can’t argue with the numbers. Watching these programs will lead to the damnation of addiction. These poor unfortunates should have been watching FOX,” said Heritage spokesman Wright Wingnut. The study was based on the methodology of the now-discredited LaGuardia Report, done in the 1930s. In that study, thousands of heroin addicts, most of them incarcerated, were questioned on their use of marijuana prior to their introduction to heroin. More than 90% reported that they had tried marijuana before ever getting their first taste of heroin. This led researchers to conclude that marijuana use was a precursor to heroin addiction and they further concluded that there was causality at work. For decades thereafter, marijuana was labeled a ‘gateway drug,’ one that almost inevitably led to experimentation, often addiction, to more dangerous substances. Perhaps now, if Mr. Wingnut has his way, liberal television programs will be seen as a ‘gateway activity,’ as with marijuana, inevitably leading to a downward spiral and the utter ruin of the individual.