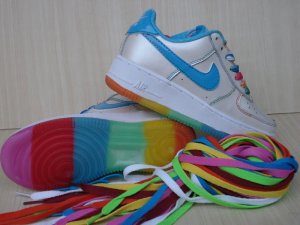 SHIN BOAN, China (FNS) Chinese sneaker manufacturer Sum Yung Uns had made a deal with a small American company to outsource the manufacture of laces for its sneakers. R. Senneckan Olde Lace Company, located in tiny Litter Barrel, Georgia, will be the exclusive suppliers of laces for all sneakers bearing the Nikeand New Balance labels. Says plant supervisor Ho Lee Che’et, “We can get Americans to work cheaper than Chinese now that we’ve pretty much savaged the U.S. employment market. And Americans are just smart enough to make something simple like laces. I mean, how can you screw up laces? You don’t need a highly educated workforce like we have in China.”

In Backwash, Mississippi where the lace factory is proposed to be built, the locals could not be happier. Mayor Bubba Gumm reported, “This’ll bring jobs to Backwater. We don’t hardly have no jobs, so this’ll be good. Mostly folk here just ‘possum hunt and trap varmints. We don’t rightly have real job jobs.” According to trapper John MacIntyre, “I ain’t never worked in no factory. The hiring fella said you don’t need no high-falutin’ edication. I went all the way to fifth grade, and he said that’s good enough.” And so the excitement builds.

Posted on September 4, 2012, in Nearly News. Bookmark the permalink. Leave a comment.