Biden to Fill in for Vacationing Letterman

WASHINGTON, District of Columbia (FNS) The White House confirmed today what knowledgeable insiders have known for 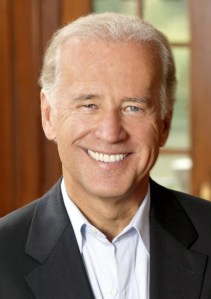 weeks: Vice President Joe Biden will sit in the host chair of Late Night with David Letterman for a week in May while the eponymous comic and host is on vacation. The VP will do five shows beginning Monday, May 13th through Friday, May 17th. The guest lineup is still being prepared but several slots have been confirmed. Ex-Vice Presidents Dan Quayle and Dick Cheney are both expected to be interviewed the first night, and will discuss the awesome responsibility of being the second-most important political leader in the nation. Also expected during the week on nights not yet finalized are the San Francisco Forty-Niners who took second place in Super Bowl XLVII this past February 3rd. Miss America runner-up Shirley Sekundt will also be on hand to discuss the enormous pressure of being constantly prepared to step in should Miss America die in office or become incapacitated before her reign is over. Later in the week former astronaut Buzz Aldrin will talk about how being the Second Man to Walk on the Moon has altered his life, making scoring a good table at exclusive restaurants a routine event. Former Assistant District Attorney Christopher Darden will also stop by to talk about how he almost got a conviction on O.J. Simpson in the famous 1994 murder trial. Jockey Mario Gutierrez is expected to describe the thrill of winning two of the three Triple Crown races, while four-division boxing champion Tommy Hearns tells how it felt to be the second best middle-weights fighter of the 70s and early 80s after Sugar Ray Leonard.